Teachers should be blamed for Low pass rate in SLC

The result of SLC has always been taken as a great subject matter in Nepal. And, the role of teachers for the result becomes an issue. There are some people who strongly believe that teachers are the main cause for the low pass rate. The writing tries to see the different views of concerned people and the existing policies about the issue.

There is a reasonable reason to talk about the result of SLC. Looking at the last five years’ result, the pass rate is decreasing every year. According to the report of Office of Examination Control Nepal (2013), in 2065 BS, the rate of SLC pass was 68.47% but just after five years in 2069BS, the result happened to be 41.57%! There seems a drastic change. Even in the years 2066 BS and the year 2067BS, there had been a noticeable decreasement.  In 2066BS, the result was 64.95 % but in 2067BS, it decreased by 9%.  Again, in the year 2068 BS, it happened to be  47.16%. These data clearly show that the rate of SLC is going down every year. And, if the trend keeps on going, after a decade, the situation will be horrible. That is the reason why the result of SLC has been taken so seriously. Of course, there are multiple factors for such a result and all of them need to be blamed but there has been an issue whether teachers should be blamed for the low pass rate.

Regarding the policies for school teachers, it is very clear and strong. There are the policies from stopping salaries to terminating from job. The subject teachers’  increased salaries of two years would be stopped  if more than 15% of students get failed continuously for three years (Act, 17.94 (Ma). That means, the education act has tried to see the ‘sole’ meaning of teachers. The act also says if any subject teachers get unable to make their students 85% pass continuously for more than three years, his/her two grades would be minus. But, what lacks is the courage to get the policies into implementation.

One of the reasons why teachers are blamed for the low pass rate is- they madly involve in ‘Politics’. The education Act (16.2) has given the opportunity to open the teachers’ union but the union is for the welfare of the teachers themselves. The union is supposed to be professional union.  The very act even says if a teacher remains absent without notice and permission from the SMC, for more than 15 days, the teacher would lose the job. But, in reality, we do see a lot of teachers actively involving in the politics and not attending class for many days but no punishment. Shreeram Bhandari, the headmaster of Mangala Devi Lower Secondary, Nuwakot is absent in the school for six months without the notice of the school management committee but no action has been taken to him yet (Adhikari, 2013).

The teachers’ unions have become as the portions of political parties in Nepal. They are supposed to be working for the professional affairs but they seem directly involving in the ‘big’ politics. That means, they give less time to their actual duties. Some of the examples can prove it. According to Shah (2013), a news reporter of Kantipur daily from Bajura states that all the schools where teachers’ unions leaders work; the SLC result was nil in 2069 BS. Very interestingly, they are the presidents of the unions. They are associated with the three ‘big’ political parties.  Due to the ironical lives of the ‘teachers’, the issue of blaming the teachers have come.

Now, the question comes- who are responsible for the matter? Should we really blame the teachers or there are other responsible factors? There are different views. Teachers should be blamed. They are mainly responsible for the low pass in SLC ( Baral, 2013). He is the examination controller. He is in the opinion that teachers do not teach well. They don’t make students creative. They always create a sort of mental fear of SLC on students. Moreover, they always make the students practice ‘Old Is Gold’, the collection of old questions. On the other hand, Wagley (2013) is in the view that; it is the Ministry of Education who should be mainly responsible for the low pass rate in SLC. He says that the Ministry has failed to the part of monitoring. He directly says the teachers’ management part is the most failure department of the Education Ministry. Looking at the views of teachers’ unions (Sharma, 2013) says that it is the political leaders who need to be responsible. Political leaders do use the teachers. If they don’t follow the leaders, they might use their cruel Power on teachers.

There are not enough teachers in the Secondary Level Schools in Nepal. In 5805 secondary schools, they need 29025 teachers but they have only 19744 teachers at present (Wagley, 2013). That means there is a big vacuum of teachers in schools.. He also says that there are some schools where social studies teachers teach Science and Math! Who is responsible for that? His answer is- the Ministry of Education. The Ministry neither encourages the good teachers properly nor gives punishment to the bad teachers. By doing such irresponsible job, they can never implement their polices well. That means it is the fault of the ministry. He believes in it.  Koirala (2013) believes that there are basically two reasons for the low pass rate in SLC. According to him, lack of professionalism in teachers and non-practical questions are the major reasons behind it. Koirala does not fully blame teachers for the low pass rate in SLC. He even gives the example of the attempts which had been done 10 years back. With the help of international donors, there had been research to find out the causes of low pass rate in SLC. The research had given a lot of good suggestions but the government did not apply those recommendations. This is also a cause of going the pass rate down these days.

Dr.  Som Lal Subedi, the education secretary has different opinion for the decreasing rate of SLC. He says that the ‘examination’ has become more standards these days than before so the pass rate happened to be less ( Adhikari, 2013).  Actually, the analysis sounds funny.

Now, the question comes how to minimize the issue. As Wagley (2013) says we need re-engineering in education. I agree with him. The education polices, especially the monitoring departments have not been functioning well. So, it really needs a sort of strong mechanism to make them implemented. Talking about the view, Bhattari (2013) says that there will not be great changes from the people who are in the ‘top’ levels now. They don’t feel the urgent actions and improvements in public schools because their kids are not there. Their kids are in the private schools.  That’s why; we really need re-engineering from the top level to the bottom in the field of education in Nepal.

Another area what we need to see is the area of national budgeting to education. Looking at the current practices, most of the budget for education goes for the salaries for the teachers. In the last year, out of Rs.63 Arab, 43 had gone only for the salaries ( Poudel, 2013). In the quality education, there come many factors such as library, computers and other resources to students and frequent training and development programs for the teachers. But, there are many schools where we don’t see such facilities and practices. I have known many schools in my district where there are no libraries. In some schools they do have it but they don’t have the culture of going to libraries and looking for the references. Training and development programs for the teachers also do not seem effective.  So, the government needs to see these areas for the better result in SLC.

There should not be extreme political games in schools. Teachers should be professional; they should not be just the agents of the political leaders. In case, teachers do actively involved in political arenas by harming the lives of students, there should be strong monitoring mechanism and such teachers should be punished. At the same time, even the government should manage the problems related to the demands of teachers. In different medias, we do see the strikes, (aandola) of teachers for their demands. The strikes directly affect on the study of students. Schools were closed for a week in Udaypur due to the strike by Rahat teachers ( Naya Patrika, 2013). This is just an example. We hear such bad news very often from different places.

The size of the classes also needs to be seen to maintain the quality in education. Shah (2014) reports a news that there are 200 students in a single class room in a school of Siraha district. Only 13 teachers are there for 1615 students.  He furthers says that extra human resources and buildings have not been added since last 18 years. This is too much. That is why, by addressing such problems and heading according to the nature and the speed of time, we can minimize the issue.

To sum up, I don’t want to blame teachers for the low pass rate in SLC. It does not mean that the teachers are not responsible for the matter but what I want to say – it is the mechanism which should be blamed.  Just making polices or laws, it does not work anymore. The implementation part should be taken very seriously. There should be proper system of rewards and punishments for the teachers. Teachers involved in politics ; they don’t teach properly so students get failed. That is why, teachers should be blamed. This kind of logic is not logical. What is the Ministry of Education looking at?  Where are the concerned people looking at? Why don’t they give punishment to those teachers who are irresponsible? Why don’t the government allocate enough budget for education? These questions demand pragmatic answers. That’s why, I mainly want to blame the policy makers and the ‘organs’ of the Education Ministry; not the teachers. 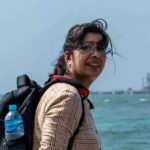 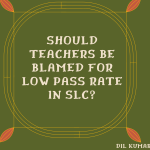